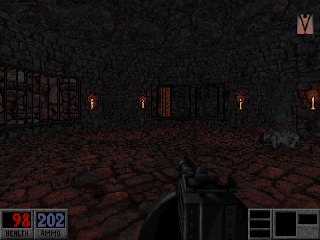 Within the heart of the mountain, Logan finds himself in a hellish cavern. To avoid being roasted alive in this volcanic environment, Logan must watch out for hellhounds and vegetation that can withstand the heat. To find his way out and reach the castle on the mountain summit, Logan must do battle with a vicious two-headed guardian. Can you take the heat? 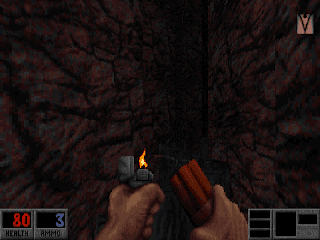 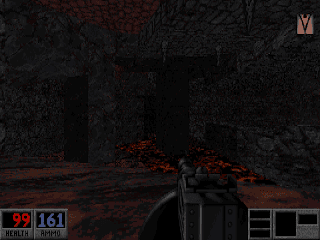 ﻿
Changes from original map:
-Added more gibbable stalagtites.
-Removed the hard to reach secret that was reached from dropping down a dark pit.
-Removed some hidden exploders, including the surprise explosion that occurred when you entered a certain tunnel near the beginning.
-Reduced the number of hellhounds and added some fire pods.
-Changed some textures and sounds.
-Added another secret.
-Gibbable statues replaced with pushable stone pillars.
-Added drip generators.
-Placed an armed proximity mine near cracked walls you need to blow to proceed.
-Changed/removed certain items.
-The lava river you jump over at the start has been changed to a stone platform that lowers when a stone pillar is pushed. This was done to avoid "trapping".﻿
Posted by DwayneA at 17:34